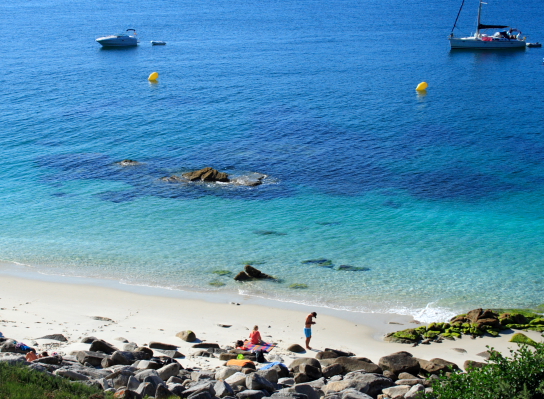 With winter reaching its darkest days, it brings comfort to daydream about our next summer vacation.  Sun, warmth, tranquility.  For landlocked city dwellers like myself, a coastal village or an island sums up these ingredients nicely.

But a saturated beach, overrun by tourism, appeals less and less in a world with few hidden destinations.  While the Spanish Cies Islands - just 15 km from Galicia’s western coast - aren’t exactly undiscovered, this rustic uncrowded utopia feels like a distant paradise.

The Cies Islands are composed of Monte Agudo, O Faro, and San Martiño, which act as an Atlantic Ocean gateway to the estuary of Vigo, Galicia’s largest city.  All three are the peaks of coastal mountains now partially under the sea, and are easily visible from both Vigo, and Baiona, a small fishing town whose fortified walls surround its luxury parador hotel seen below.

The islands’ proximity to the mainland made them attractive to settlers over the centuries, from the Romans to medieval monastic orders such as the Benedictines and the Franciscans.  However, sea powers like the Ottoman Turks, as well as Barbary and English pirates, frequently attacked the islands, using them as a base of operations and forcing the monastic orders back to the mainland time and again.

The Cies Islands would be abandoned for good by the 1960’s, and became a popular, no-restrictions retreat until they were declared a Nature Park in 1980, reinforced by National Park status in 2002.

The Best Beach in the World

This protection came just in time, as in 2007 the Guardian newspaper named Rodas Beach, the strip of sand connecting Monte Agudo to O Faro, as the best beach in the world, a status that would have surely trampled the island.

That protection severely limits the islands’ visitor-count, so don’t wait to reserve your spot on a ferry (unless you’re lucky enough to have your own boat, which also means you can explore the detached island of San Martiño practically alone).  The same goes if you plan to spend the night at the island’s rustic campsite.

The campsite’s affordable rental tents make it easy for travelers who didn’t bring their own, although it did feel like being on the set of M.A.S.H. at times.  The site offers a store and a restaurant with all the basics covered; the only thing you have to watch out for are the seagulls…

Apparently, the world’s largest colony exists here, roughly 22,000 pairs!  Despite the warning signs above, they really aren’t as big as your tent.

Things to do on the Cies Islands

While the unpopulated beaches are truly incredible, to say the water is cold is an understatement.  Still, we were there on a hot August day, and the drastic change between sweating it out on the sand, and diving into the icy Atlantic was bracing.

For nature lovers, a highlight is exploring the incredible array of flora and fauna along the different trails.  The island’s info cabin sells booklets covering the different routes, and the park’s staff offer daily guided hikes, as well as diving and kayaking excursions.

The trails not to be missed, are the ones that wind their way up the western side of the islands, offering dramatic views out over the rugged cliffs.

Reach the peak just before dusk, and you’ll be treated to a spectacular sunset that feels like watching a ball of fire sink into the ocean.

Following that, make your way back to the campsite and pull up a seat at the water’s edge for a final burst of colors before nightfall.  Not a bad way to spend vacation.

Getting to the Cies Islands is easier than it looks.  The closest city to fly into is Vigo, which can be reached on a cheap flight from Vueling Airlines out of Madrid, Barcelona, and many other medium sized Spanish cities.

You can then catch a ferry to the islands from Vigo, Baiona, or Cangas.  From June to September, there are regular boats to the islands - a less frequent service operates at Easter and in May and October.  The ferry takes about 45 minutes and costs around €16 round trip on www.mardeons.com.